Why is the United States successful compared to other countries?

https://www.quora.com/profile/Dan-Holliday
Why is the United States successful compared to other countries?

I recommend reading “The Accidental Superpower” by Peter Zeihan on this topic. It explains the following: 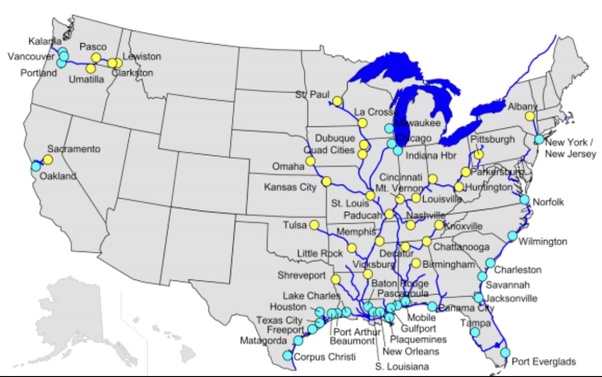 As you can see above, the United States has 15,000 miles of interconnected waterways, more than the rest of the planet put together. That’s important because moving “stuff” from point A to point B is expensive, but less expensive if you float it. That means the United States is destined to be capital rich because it’s citizenry has direct access to a lot of “stuff” at low cost.

And you see that long blue line in the picture above? That’s called the Greater Mississippi basin. It sits on the largest arable land in the entire world. Thats called the “American bread basket” and is home to a LOT of farmers. All this food is transported at low cost to Minneapolis-St. Paul or Chicago, and then transported very cheaply throughout the United States, and via Houston, the world.

Ever wonder why Americans have a tendency to be isolationist? It’s because Midwesterners don’t NEED the rest of the world. The rest of the world NEEDS us, in order to keep their food cost low so they can invest in other “stuff.” But because American food is so cheap and easily accessible, our coastal elitists can invest in other extravagant things such as industrial, technological and philosophical inventions.

This helps explain America’s leading role in the industrial and technological revolutions. America can build great universities, great cities and great militaries because the most important commodity, food and water, is heavily prevalent to Americans.

Now, I will stop harping on about food. But not only does the United States have lots of water and food, but it has four large mountain ranges with tons of raw minerals to choose from. 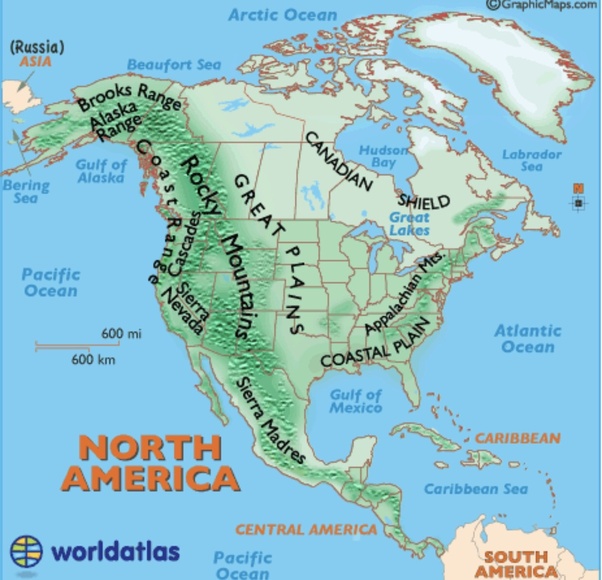 The Appalachian, Rockies, Nevadas, and Alaskan Ranges are home to hundreds of billions of pounds worth of bauxite, iron, gold, silver, copper, and pretty much everything you can think of. Not only that, but America also has this…. 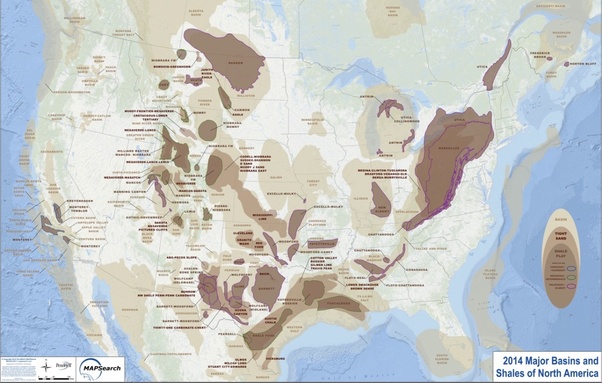 You see all that dark brown? That’s more oil and natural gas reserves than any other country on planet earth. And this doesn’t have Alaska’s ANWAR field, which may have more natural gas and oil than all of continental US put together.

This means that continental America has its own food, water, oil, natural gas, and raw minerals. In theory, we could cut ourselves off from the rest of the world, and we’d be fine (I’m not suggesting this). The rest of the world does not have that luxury.

And to top it all off, America is one of the most naturally defendable pieces of geography in the world… 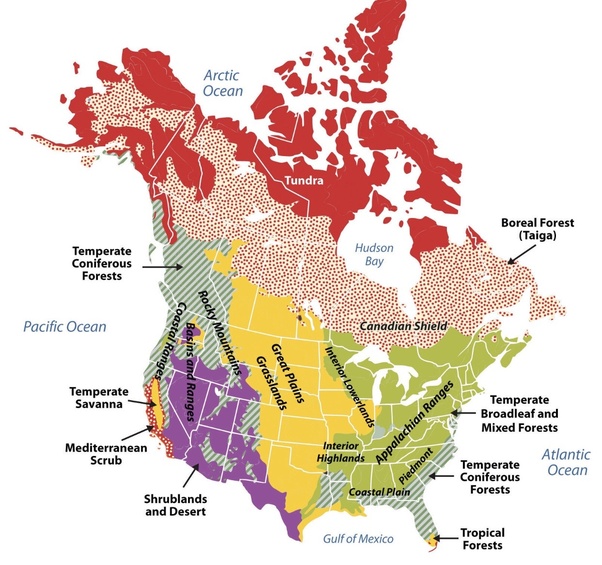 When America builds a military, it’s not to defend our borders, but instead to project outward our influence. Our armies and navies can go wherever and whenever it wants, and no one can do the same to us. It’s why America tends to be reckless in some of its foreign policy decisions, whereas other powers don’t have that luxury. This simple reality is why many powers become frustrated with American hegemony, because when we make a foreign policy blunder, we barely suffer any consequences. But it has an overwhelming impact on the rest of the world.

Americans are a pure settler culture. When the Industrial Revolution hit Europe, millions of poor Europeans lost their livelihoods due to a decrease in need for agricultural labor. As a consequence, millions of these Europeans flooded into America. How did America handle this? 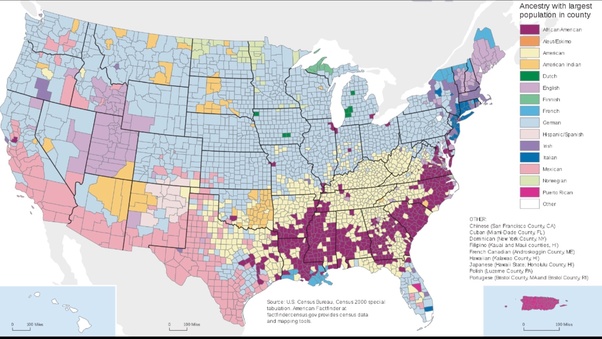 Well, the American Anglo-Saxon elite allowed populations to come into America with the expectation that they wouldn’t be a burden on the state. These new Americans were handed a rifle, sent out West, and told to fight themselves a plot of land, cultivate it, defend it on their own, and trade it into the east coast. The only time when the US Government would get involved was if a Native Tribe was successfully repelling the process of European settlement. In that event, the US sent an overwhelming force to “neutralize” the threat. That would be the polite way to say that.

This helps explain the American culture of extreme individualism and the “leave our community alone” culture. When the Germans, Irish, or Scots settled in America, they did so as a community specific to their own. This community built their own church in their image and created a system of governance appropriate to them.

These communities were essentially Socialist networks in their make-up. These populations donated generously to the local church, at which the church used those funds to build schools and hospitals intended to be used solely by the community members. All interactions with “that town down the river” were to be strictly on the basis of trade and common defense against Natives. The most able men of these communities learned English so they had a common language to discuss trade and defense with the surrounding communities.

Understanding this process is essential to understanding how all American universities have their origins as theological institutions, intended to educate the local German or Scottish community on their historic, religious, and economic practices. Harvard, for example, was founded on behalf of Anglo-Saxon Puritan Minister John Harvard “to advance learning and perpetuate it to posterity, dreading to leave an illiterate ministry to the churches when our present ministers shall lie in the dust.” Harvard was originally intended to train Puritan ministers to preach the Gospel throughout the Anglo-Saxon colonies in 1643.

Similarly, this is why American hospitals are called by their original religious affiliation. The “Methodist Hospital,” “Lutheran Hospital” or “Presbyterian Hospital” are examples of European settlement institutions that have their origin in the “take care of your own community and your own people” mentality. This also explains America’s hesitancy to adopt more European or Canadian style healthcare, welfare, or gun policy. Each individual settlement believed in taking care of their own community, and gets frustrated when the state attempts to supersede settlement law.

While this does have its own problems, this has helped create the American entrepreneurial culture. America is home to some of the the world’s most advanced technological and industrial companies. It started as a way for the German settlement to figure out a better way to trade into the Scottish settlement down the river. It has now become “what communication method using technological software is most desirable to the consumer.”

The Angles, Saxons, Normans, Danes, Welsh, and Scots put together an impressive political structure in Greater Britain from the fall of Rome through the Magna Carta and the Glorious Revolution. An adherence to the common belief in the divinity of the individual and the respect of individual liberties, has kept the government of the United States from interfering with the development of American enterprise.

What makes America exceptional is a byproduct of its geography, culture, and history. It’s also what makes us despised in many parts of the world. Americans are a byproduct of Western European pioneering and conquest, with some 72–80% of our population being a descendant from Western Europe. 15% Anglo-Saxon, 15% German, 15% Hispanic (Spanish), 15% Irish, 5% Scottish, 5% Italian, 5% Scandinavian and a 5% Slavic/Balkan/Jewish admixture. It is also home to 13% African American, 4% East Asian and 2% Asian Indian/Middle Eastern. And sadly, only about 1% is Native American, once a people who solely populated this land alone.

*** Interesting facts – There are 28 million descendants of Ireland in America, almost 6 times that of the island of Ireland. There are more ethnic Greater Britons (England, Scotland and Wales) in America than in Great Britain (70–84 million vs. 66 million). More than one third of the global ethnic German population (German, Dane, Swedish, Norwegian, Austrian) lives in America. There are more ethnic Poles living in Chicago than in any other Polish city with the only exception its Capitol, Warsaw.

But in the end, it’s a land of many different cultures that settled within this divinely gifted land, and a people who learned a common language, share a common history and share a common destiny. While our history is regretful in some regards of cultural and ethnic infighting, it is an unfortunate process of forming many different cultures into one. And while our assimilation process is viewed as ugly to outsiders, it’s much more effective than any other nation to date.

It’s the individualist American ethic, founded on Judaeo-Christian Protestant Individualism, that will continue to propel our institutions to the highest competitive advantage. And for us Americans, although foreigners despise our patriotism, this is something we are very thankful for.

One response to “Why is the United States successful compared to other countries?”