Quotes of the Day

TESTIMONY ON P-LAW
It’s not set(ideal, verbal) logic of inference, but operation(real, operational) logic of possibility. It takes a very long time to grasp that P-law is to life sciences what physics is to physical sciences. The depth of P-Law is awe-inspiring. Because just as it’s difficult to write a proof in math, it’s equally difficult to write a proof in P-law. P-law=Math of Action.

-“Here’s what helped me initially understand P law and how it mirrors Natural law: it’s in human nature to want cooperation, to want others to treat you fairly, to want to own property. Works the same in animal kingdom. Laws in Western civilization were based on these principles.”- TruthQuest

SEX DIFFERENCES IN PERCEPTION OF THE RED QUEEN
–“Given randomness and uncertainty throughout Universe and Nature from sub-atomic level up to the human kingdom, P Law is the calculation of operations to mirror Natural & Universal laws by bringing order, predictability, homeostasis and ADAPTATION to an entropic human ecosystem?”–

In other words, we are always in a race with the red queen. I think males intuit this constant, and females CAN’T intuit it any more than males intuit the female ‘fear’.

SCIENTIFIC LOGIC: THE TERNARY TRUTH TABLE V2
Center column = Truth Hierarchy
(Doolittle 2020)
THE LOGIC OF COGNITION
I write proofs from first principles. If I can’t write a proof, I can’t claim my judgments are true. If I can, then I can. This is what separates people who think they know by accident, from people who do know by discipline. Very, very, very few people work from first principles.
Entropy measured by Math is the first principle of the constant relations of the physical sciences. Acquisition measured by operations is the first principle of the Behavioral (Natural) Sciences.
THREE FUNDAMENTAL INSIGHTS
Three fundamental insights from my research:
1 – ‘They’ are far more evil than anyone expected.
2 – Christian morality and ethics are scientifically optimum, and the Catholic Church simply failed to transition natural law from dogma.
3 – Fascists discovered the optimum state.
A PAINFUL TRUTH
A painful truth: Conducting my research program in public provided more evidence that while a few exceptional thinkers pursue fundamental truths, all others only seek justification of instincts, arguments that justify them, and the power to advance them – w/o any understanding.
THE WEST HAS ALWAYS PRACTICED SCIENCE

The Pre-War European > Germanic > Anglo civilization was the closest to and least divergent from the law of the universe.

Rule ofLaw in the West, means In Concert with And by Adaptation To the laws of the universe.

The west has always practiced ‘science’.

LAW IS THE KING OF THE HILL

CATHOLICISM
Shifting my opinion on Catholicism a bit, in that church dogma produced what is very close to a system of natural law sufficient to unify families, clans, tribes and nations of PEASANTS to compete with the families, tribes, states of ARISTOCRACY. But the Nobility captured Church.
ECON IS THE MOST IMPORTANT SCIENCE
You know, every major prediction I’ve made that I can remember back to at least 1983, was spot on. But it doesn’t matter. Because it’s impossible to convince people to act before they can’t escape acting. Why? It’s easier.

Gotta teach Behavioral Econ -> Micro Econ -> Political Economy. Macro is at this point, going to be irrelevant other than at the most abstract level, because the coming financial system reform, maximizing sovereign funds, is going to eliminate the noise in the system.

PREDICTING SIGNALS NOT NOISE
There is a very great difference between predicting deterministic consequences and predicting the noise within them. If you predict changes in noise you have either inside information or you’re lucky. 😉

SOLDIERS IN THE CAPITOL
Kabuki theatre. If the conservatives showed with 500k to 1M people what do you think 500 soldiers are going to do? You think the military is going to open fire on citizens? You think they’ll use explosives? Artillery? It would end the government, the country, and the military.
THE STATE FEARS THE RIGHT
The Government is going after Right protesters because they fear them. They brought the state’s illusion of control into question. They do not go after Leftists, BLM, and Antifa because they justify the state, and because the public sector bears the fear and costs of riots.
GLOBAL POWER SHIFTS
There is no way that the current order can continue without the previous radical asymmetry of the American economy vs the rest of the world – especially between the wars and the abandonment of socialism and communism.

They won’t act until they have to – and have political cover.

–“Bit off topic question Mr Doolittle. Did you coin a term something like “putting face above truth” (I paraphrase) ?If so I think it’s similar to my term – lawyering.Trying to *appear* correct rather than actually *being* correct…happens often in debates.”–

You’re looking for “Truth before Face vs Face before Truth, vs Face regardless of Truth”.
ie: west, asia, islam

Lawyering is a good vernacular term for “the rhetorical pretense of knowledge not demonstrated” Fraud by Suggestion not yet fraud by omission or declaration.

PUTIN
Putin has made only two mistakes in his entire tenure, and both are because of his lack of understanding of western trust. He didn’t take the case for NATO membership, or for the Don River valley and black sea-port to the American people – he would have won both. (See Israel)

Yep. As bad as the Mesoamericans were – and they were bad – nothing compares to the work of Islam bloody Islam.

And no. Amerindians were brutal vile primitive people who only slightly better.

Q: “What stopped the Hindus fighting back effectively and what was the Islamic competitive advantage?”

Mobile Raiders whose resources are directed to horse and arms can profit by plunder, looting, slaving, destroying and conquest, because they are always superior to landed defenders whose resources must instead be devoted to defensive, static, production.

Q: “How did Slavic states like Novgorod survive and turn the tide against the Turkic & Mongol hordes, what did they do right compared to the Hindus?”

They didn’t. They endured while mongols failed to create a state bureaucracy and formal institutions – instead focusing on extractions – and took advantage of deterministic weakness for rapid aggressive expansion. This remains the Russian strategy today: suffer, wait, sprint.

JEFFERSON
The founders were trying to escape the parasitism of both church and state, and didn’t want to repeat the same. The federation (not country) left almost everything to the States. The rush for the western expansion, war over it, created the central government they feared.

Jefferson was supporting the rise of the meritocratic middle class, and existing the parasitic church and state. And he wanted to escape what we would call today peasants, but he called people of low character.

And so? The reality was that the crown was no longer paying for defense, and the federal govt had no money, and these people were evading necessary taxes. It’s not like today when we’re complaining about absurd uncontrolled spending and debt. It was a simple economic necessity.

(And liberalism – middle-class rule, that escaped the parasitic burden of church and aristocracy-state, has nothing to do with today’s Left which seeks to RESTORE that parasitism by peasantry(immigrants), academy (church) and state (bureaucracy). 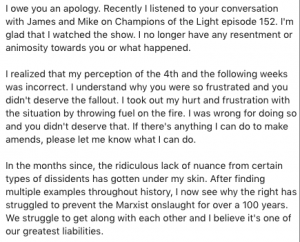 Thank you. Means a lot to me. But the problem remains. Nazis and Christians did the damage to us – not the left or the mainstream. It ended our reach. So like I said the conservative crab bucket makes any organized resistance, rebellion or revolution to save ourselves impossible.

–“I believe you’re 100% right, but to be devil’s advocate for a sec… Not to bust your balls or anything, but if you had put up a more dramatic verbal match with the BLM guy, it may have been the key. Being quick on your feet, like Tommy Robinson”–

Everyone was wrong. Because I made it impossible to bait us into fail. Symbolism is for chicks and children. Men either follow strategy and tactics or they’re children.

Look what the left does: the bait into ‘moments’ that they can misrepresent. Don’t do it. Gandhi until Vikings.