RACES EXIST, ARE MEANINGFULLY DIFFERENT, AND IMPORTANTLY SO.

2 – The South Eurasian Race: Includes the  peoples of north africa, the levant, and  mesopotamia, caucuses, iran, the central asian steppe, india,  and what we consider the turkic branch is a hybrid of iranic and mongoloid (east asian).

3 – 750M: White “Loosely” European Peoples (Subrace) means ‘european christendom’ which includes southern europeans: southern spain, the boot of italy, the byzantine balkans who are of anatolian rather than russo-ukrainian origins.

4 – 450M: White “Narrowly” Northern European Peoples (Minor Race) means descendants of atlantic, germanic, and slavic europeans from france to the urals, of aristotelian(atheist), protestant, catholic, and Orthodox backgrounds, who are primarily the descendents of russo-ukrainian, and built their civilization in the cold.

White nationalists, and white identitarians use the narrow definition. When the rest of us refer to european civilization we use the looser definition.

BEEN DOWN THIS ROAD BEFORE

I’ve answered this question before (it’s a repeat). There are about 450M Northern European ‘white’ people. (atlantics, germanics, northern and eastern slavs) If we include earlier generations such as southern europeans (anatolians), and old europe (balkans) are about 750M white people. (FWIW: The white population of the united states is around 190m.)

Quote from a specialist:

—“The truth is that anyone who can read a PCA-plot will know that Europe is genetically divided into two different categories and that is North and South European, with the latter being less homogenous and closer to the Middle East in terms of FST-distance, which strengthens the idea that Southern Europe has received gene flow from West Asia. This becomes more evident when you see that Sardinians do not express this pattern (pulling toward the Middle East) despite having no Steppe ancestry.

With that being said, you should take a look at the plot I attached by Lazaridis et al (2016) which showcases the intra-European division. Ignore the non-European clusters. What you will see is that Chris’ theory of Italy and Spain being supposedly half-White is null and void, although admittedly there is South-North cline within Italy (since Italy is the country with the highest genetic diversity in Europe).

The point is that even the northern part of Italy is well within the Southern European genetic continuum. The only country which has a legitimate North Europe-South Europe crossover cline is France.”— 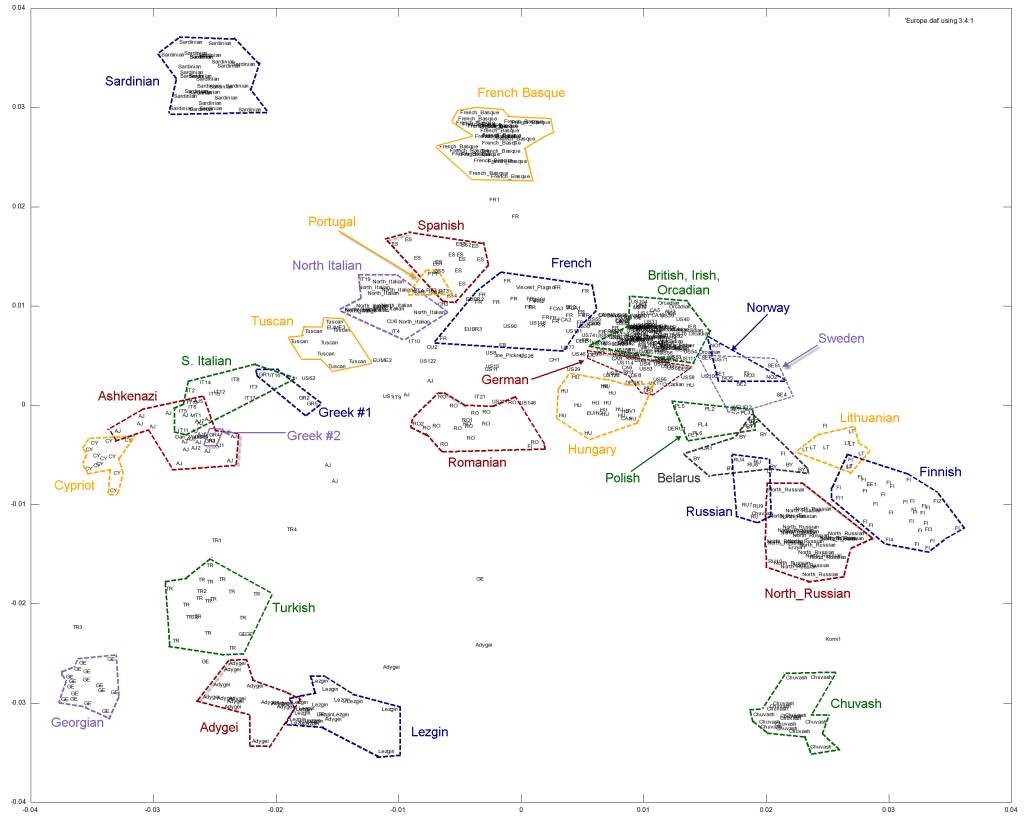 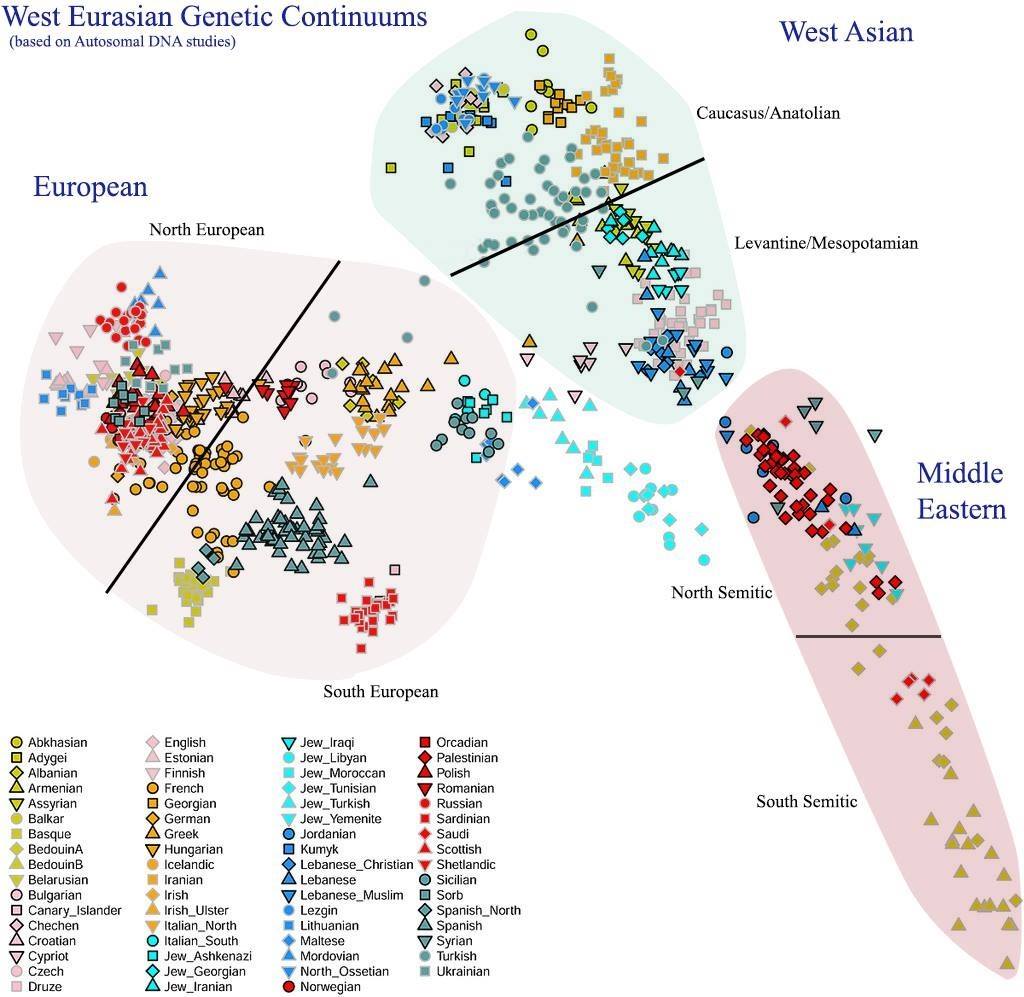 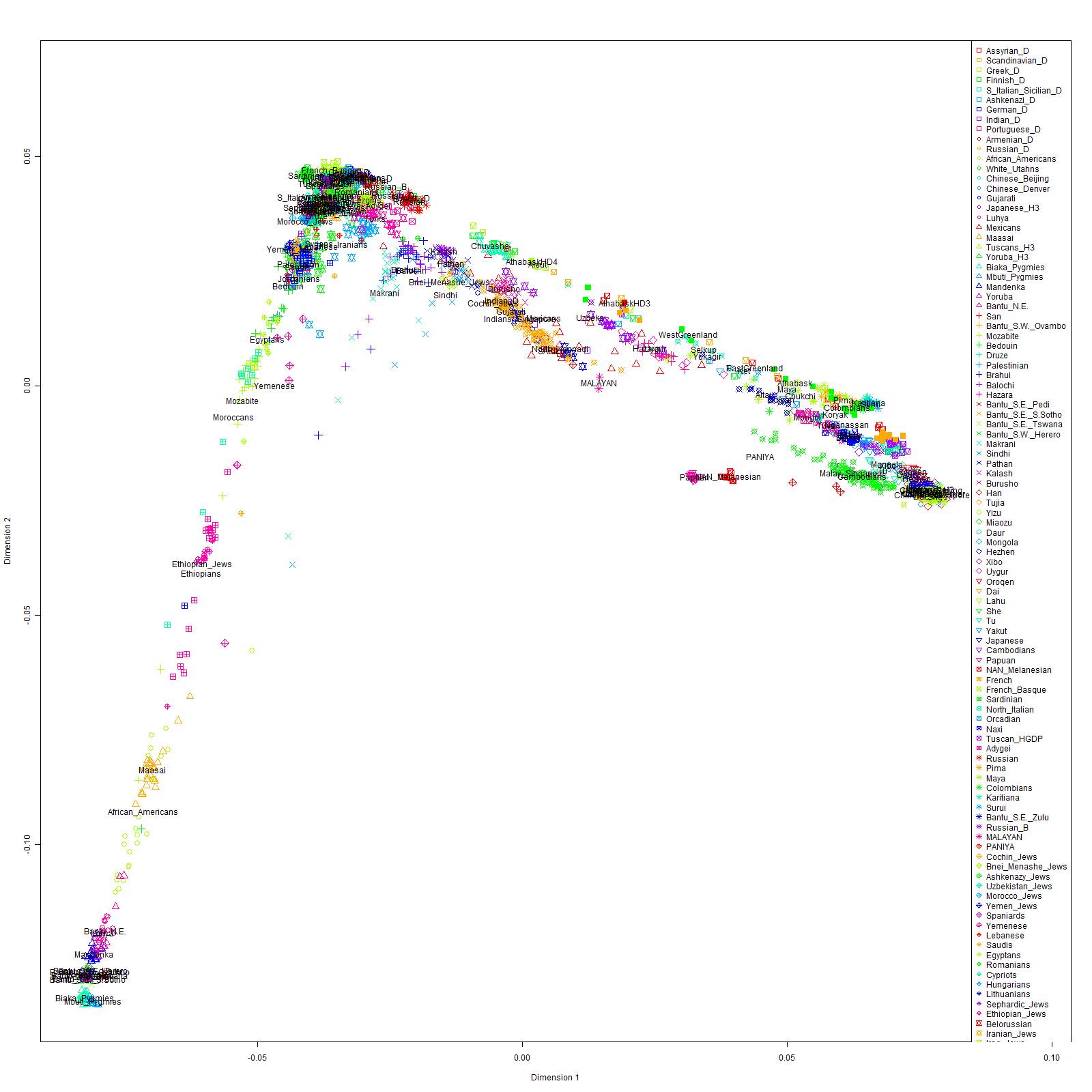 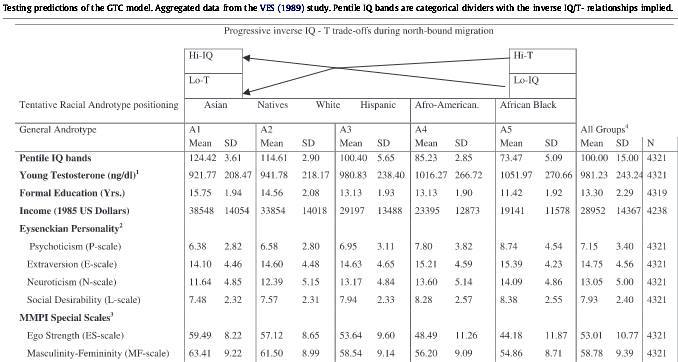 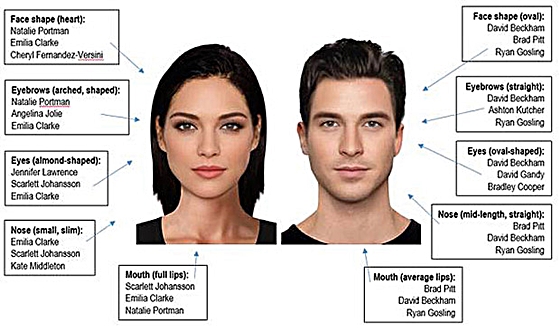 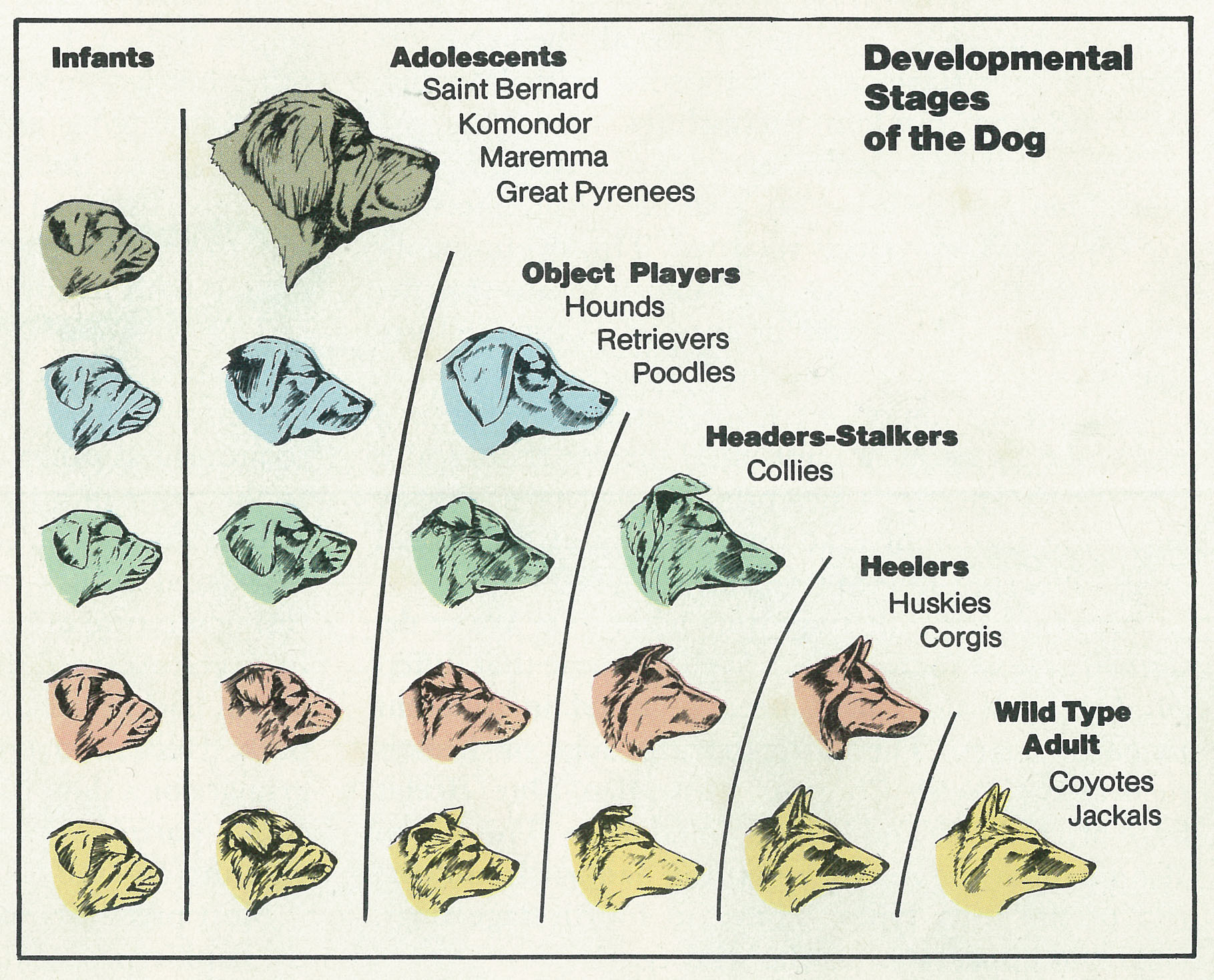 THE PSEUDO-SCIENTIFIC ATTACK ON CIVILIZATION.

The curse of postmodern pseudoscience in most of the other answers. Postmodernism like Marxism was designed, like Abrahamic Religions, as an attack on European Peoples (civilization), to eradicate our civlization in the modern world just as Abrahamic religion was used to eradicate the five great civilizations of the ancient world: Roman New Europe), Byzantine (old europe), Anatolian, Persian (Iranic), Egyptian, and North African. All those civilizations were destroyed by the last attempt at cultural destruction.

Why? Marxism/Postmodernism in the modern world, and Abrahamic Religion in the ancient world foster dysgenic rapid reproduction of the underclasses reversing genetic domestication under small farm mixed agrarianism, effectively weaponizing reproduction and ignorance and superstition against civilization.

The rest of the world did the opposite and the sizes of their underclasses pose such a burden that they cannot produce sufficient middle and upper classes to produce high trust commercially successful political orders.

Races, Subraces, Tribes, Clans, Families and Classes can interbreed, but differences matter. The primary differences are the degree of neoteny (white and east asian) vs deeper maturity (semites, iranics, africans, and australoids), the more feminine or masculine structure of the brain (yes really), and the size of the underclass due largely to winter climates, manorial farming, and close cohabitation in winters while caring for animals. (Or in the european and chinese cases, aggressive use of criminal punishment – particularly european hanging of large portions of the underclasses every generation).

Using size of class, degree of neoteny or maturity, and balance of masculine and feminine traits, each of the Races, Subraces, an sometimes Tribes, has evolved (adapted) for certain excellences that are geography, climate, means of production, and method of socialization dependent.

Human domestication like animal domestication, uses neotenic selection to suppress sexual maturity and preserve the features and cooperative intuitions of youth. The goal for any polity is to increase intelligence, industriousness, and trust. Counter to our assumptions the San (the oldest continuous tribe) were more gentle, and humans appear to have become increasingly AGGRESSIVE in some regions and increasingly GENTLE in other regions, which is easily measurable by group testosterone distributions, rates and ages of maturity, and ‘hardiness’ of features (deeper maturity). By the upward redistribution of reproduction (china, europe, and jewish) you increase the distribution of neoteny in the public largely by the reduction of rates of reproduction of the underclasses. The simple fact is that many people are a harm to their fellows simply because they are a drag on norms, laws, traditions, values, and institutions, literacy, technology, and the workforce capacity – perhaps most importantly making a sufficient middle class to produce a voluntary organization of a Pareto hierarchy and market economy impossible, and forcing the dependence upon familial corruption (india, south america, south europe, all of islam) despite access to trade routes.

The optimum political order is homogenous – diversity is always and everywhere bad for obvious and well documented reasons. It trades short term profits for long term costs that destroy the political order and reduce it to levantine, south american, and indian levels of poverty and corruption.

THE EUGENICISTS WERE RIGHT.

And any group of size (the east asians) who succeed will leave the rest of the world behind. The europeans managed by the late middle ages to nearly eliminate their underclasses. This is why European intelligence is dropping (the flynn effect is reversing). Not because of individuals. But because of restoration of their underclasses. If Norway can lose IQ (they have) then any group can.

Smarter people are more moral – simply because they can afford to be.

Heathen: People of the Land - Our Land. (Not Urbanites)

---"Q: Does the government really keep us 80 years behind in terms of technology?"---