THE CIRCUITS OF THE BRAIN 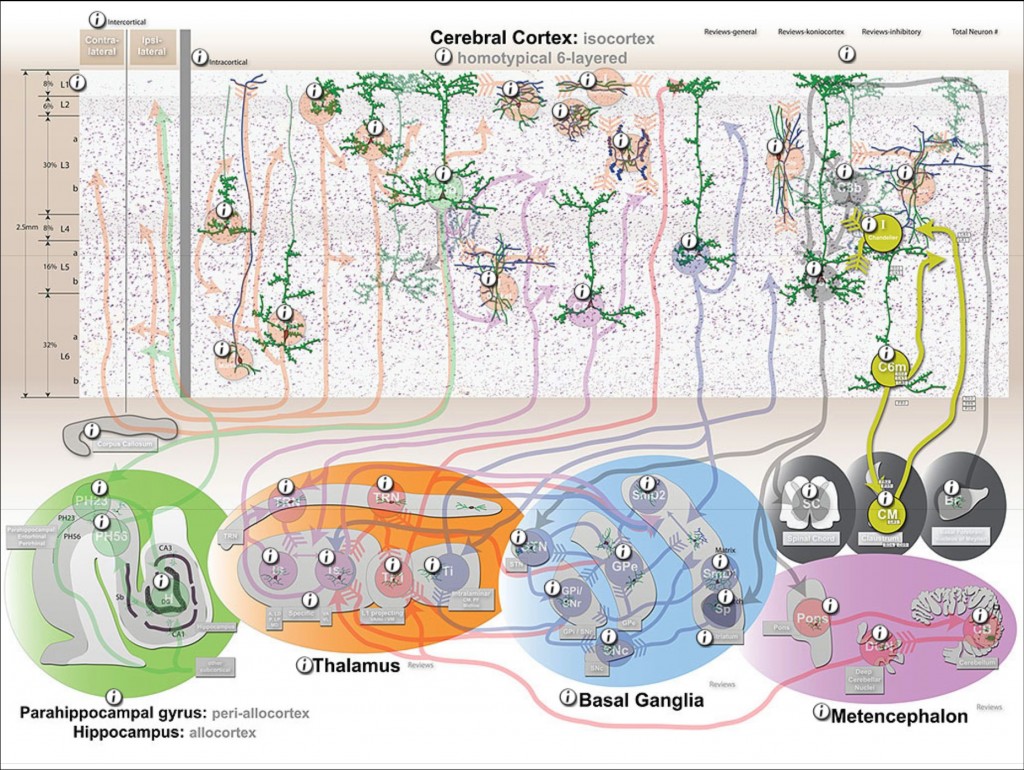 The brain makes use of a number of ‘circuits’. A circuit provides a feedback loop that competes for, creates, maintains, or loses attention, producing information. Just like an electrical (unidirectional) or hydraulic(non-directional) circuit. What you ‘experience’ is whatever has enough current to win the competition among the predictions produced by stimulation.

When you want to theorize how something in your brain is working, think thru:

1) Nerves and neurons are the same thing – just longer or shorter.

2) Nerves and neurons are dumb things: they turn on and off, and they increase or decrease in rate – and that’s it.

3) Groups of Neurons are not so dumb things, they take a sequence of on and off and predict what’s coming next, and forward that prediction to the rest of the neurons in it’s ‘field’ (range).

4) Columns of neurons predict objects (models) and where they are in physical space in relation to you.

5) All active columns compete with each other for ‘coherence’ in time and space. Although there are as much information coming from your eyes as the rest of your body combined.

6) This information is ‘distilled’ into a three dimensional roughly hexagonal spherical grid that accounts for your body size, your body, head, eye direction, your direction of movement and speed of movement, to create what you perceive of as objects, spaces, and boundaries. This is your ‘sixth sense’: the world model. And its done in less than half a second in massive parallel by those very simple nerves, neurons, mini-columns, columns, modules of columns, and 50+ regions of the brain.

7) Anything that is existential is reinforced, and anything tat novel is indexed by auto association to whatever network of neurons just ‘won the competition’, and whatever novelty you experience during the day is repeatedly ‘rehearsed’ (echoed, repeated) very quickly, in a sort of time-sharing with the rest of your brain, and then during sleep.

8) All of this information recursively passes from the back to the front of your brain, iteratively producing competing predictions vying for sufficient ‘amplitude’ to grasp your attention.

9) What ever maintains your attention stays stimulated by the circuit and contributes to the next cycle of information processing. So you control what you think by controlling what you pay attention to. This is what creates cognitive agency. It’s also why its usually easier for men than for women.

10) For the most part the thalamus determines what holds your attention – although our brain includes interruption circuits (dorsal and brainstem) that can seize attention in the case of opportunity, pain, or duress.

11) Your brain evolved to identify routes to resources that can be acquired for consumption, on one hand, and to be cautious of predators on the other – and pretty much, whatever gets your attention will be that – unless you train it to do something else. The hierarchy from the back to the front is from the sensory to the physical to the imagined.

12) Mindfulness – or any other state – is merely the ritualized (habit) of controlling and building networks using the attention circuit. Really. It’s that f—-king simple. Keeping the section of Christmas lights on that you want to keep lit.

Martin Št?pán: In regards to that competition, on what criteria does the selection happen?

Curt Doolittle: In order: (a) breadth of association (b) novelty (c) acquisition of something. Hence acquisitionism. The percentage of reward sensing neurons is pretty low but it’s enough. I can’t recall off the top of my head but it’s lower than I thought it wold be.

Martin Št?pán: The breadth of association is increased by reinforcement (repetition), correct?

Curt Doolittle:  Breadth is simply the number of associations activated. But yes, any activation increases reinforcement. That’s why we get good at things just by imagining doing them.

Reece Haynes: Extremely insightful, thanks. Especially points 8 and 9.
Helps to explain how habits work, which dovetails with recent conversations I’ve been having.
If you are completely aware of what your body and mind is doing at any given moment, and most people aren’t, then you won’t engage in habits. Because once you directly observe a habit, you discover that it can only persist if you’re not conscious of it. … For example, I often click my jaw, a benign nuisance. But if I focus on it, I don’t do it. When my focus moves elsewhere, it comes back. Awareness versus unawareness. Attention versus inattention.

Martin Edhouse: Have you tried answering what I think neuroscientists call the “hard problem”? which is, how is it that electrical activity within neurones gives rise to subjective experience.

Curt Doolittle: I think we know the answer and I don’t think it’s even complicated. The problem is that they want an observer and we are recursively observing a stream of memory that is changing so fast – like movie frames – that we can’t detect differences other than those differences necessary or useful for our perception and action (novelty). As far as I can tell everything is experienced where it’s constructed and we can’t disambiguate inputs any more than we can disambiguate the outputs (how we move our limbs). So the following iteration (recursion) of experience produces layers upon layers of predictions constantly falsified by the next moment of prediction that our short term memory can only identify changes – not introspectively hold any given state for analysis (we capture episodic memory for condensing that stream of experiences.) The reason being that the distributed calculation producing what we call either input experience or output action is so granular its only meaningful as a stream of changes TO ITSELF in very short term memory. SO like everything else in the brain, all we have is memory to work from. Either memory of the past little bit, or the forecasts we make from the last little bit into the future, and our control over that process by focusing our attention – which does nothing except shut off that which we aren’t interested in. I think the only thing stopping the average person from comprehension of experience is a basic understanding of the mechanisms for assembling and then predicting from the spectrum of spatial models from interior to body to proximity to space to boundaries, to the intentions and minds and imaginations of others – that’s what consciousness consists of that prediction and memory of changes in those predictions. In that sense, while we have our six senses so to speak, they are primitives, and the first generation assembly of those senses is into a spatial model. it’s that spacial model of the world we experience. And we are so heavily dependent upon it we almost can’t ignore it. Once you see that we do this just like a three-dee video game does (exactly the same way – it’s scary) and that we have neurology that specifically produces the same information as does a three dee video game for the same reason, you see it’s naturally deterministic that we would think that way and that computer games would have to be architected that way – just as much as atoms must be composed of only three particles. It’s beautiful, it’s terrifying, and it’s dehumanizing – and yes, we compute differently from computers but the analogy is more correct than it is false.
So my understanding is that while the above narrative might be improved upon, that like newton’s gravity the description is correct for every and all questions of human scale – which is all we need for self and other understanding.
I differ from Dennett in that Dennett uses philosophical and neurological frames first, and I use technological and neurological frames first, and avoid philosophy which I consider only slightly better than theology. I don’t differ from Searle that much. I consider myself the beneficiary of Searle as much as I do the beneficiary of Hayek. Again he uses the philosophical frame and I avoid it. I differ only in that I have perhaps a slightly better understanding of how subjective experience is constructed because one of the side effects of my illness is a rather slow restoration of consciousness when I (frequently) lose it and CAN experience that construction at least a little at a time each time. It might also be that I am VERY current on the research (I know the working papers) and he is not producing as much public material. So I don’t know what he thinks today. I might like to ask him but he’s getting on in years.
I think the most articulate expression for ordinary people that’s available in video is Michio Kaku’s explanation of consciousness and it’s something like three minutes or less and it’s spot on. It’s just prediction of space and time at increasing distances.
The perception I find most interesting is that even with very little consciousness, when waiting for stimuli, when waiting for that thin layer of neurons to create a sense of reality outside the body, that ‘temperament’ you consider ‘you’ is there. What I find most interesting is the shift from that temperament when I’m first aware of it, through changes as your world model and layers of memories come back to life. I feel every time, that I’m moving from childhood to adulthood and I see my change in values as the world model and current context, and intertemporal context come into being. It’s fascinating.
I most cases, I avoid philosophy except to explain why its false – or to find a way to bridge between someone else’s frame of reference and what I understand to be the scientific (most parsimonious and consistent) frame of reference.